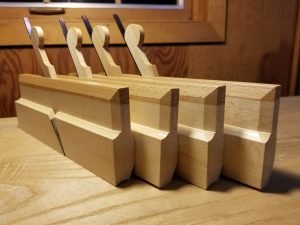 Red Rose Reproductions LLC was created in 2014 with an objective to bring resurrected woodworking tools to the market.  Daniel R. Schwank, company founder, has made many tools for his own use, and decided that others may appreciate them too.  Red Rose Reproductions focuses primarily on molding planes patterned off mid 18th century British designs.  Offerings also have branched into other bench tools and work holding devices.

In October 2017, Dan gave up his work as a tool and die maker to pursue the business full time.  He makes a number of his tool offerings in batches and offers them primarily through this web site and tool shows.  Some tools, such as hollow and round molding planes, are generally made to order.  He also teaches classes on making hollow and rounds in his shop, which is now relocated in Sterling IL.

Dan’s interest in furniture began with his marriage in 1994, when he was introduced to woodworking by his Father-In-Law.  Thus began a journey to build his skill levels and knowledge of furniture design and construction, and later hand tools.  As a tool & die maker, Dan found woodworking and tool making to require many of the same skills and approaches to tasks as metal working does.  This also made it a natural transition into making tools.

Dan is primarily self taught, although he has taken quite a few classes devoted to 18th century furniture styles and construction techniques, and plane making with Tod Herrli and with input from Larry Williams of Old Street Tool. His approach is a combination of both modern machinery and traditional hand tools, although with plane making, most of the work is done by hand.

Red Rose Reproductions, located in Sterling IL, is modest but well equipped. A lot of effort has been put into keeping the overhead down while at the same time striving to work as efficiently as possible. The result is pricing that is very competitive yet of high quality.